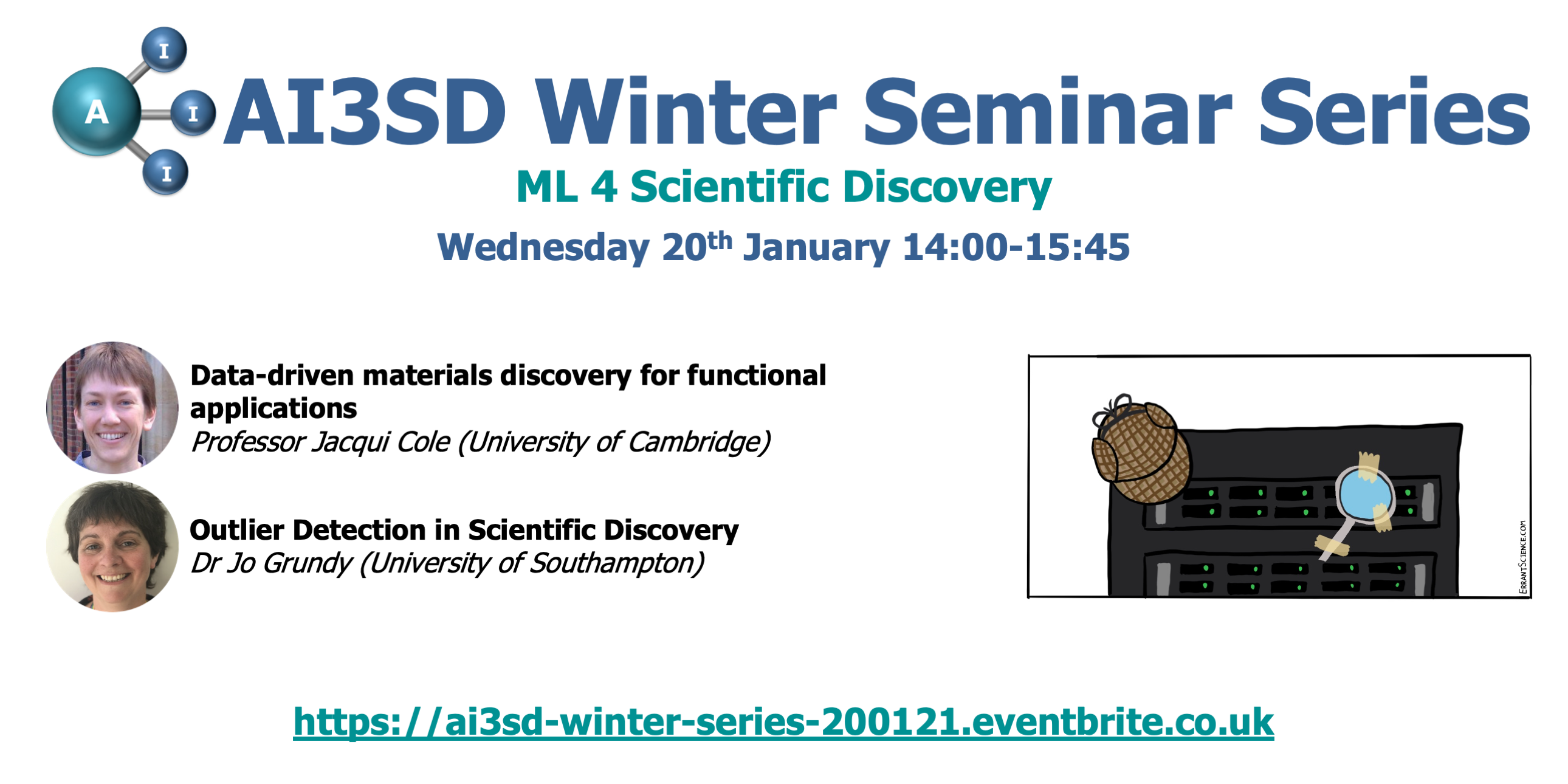 This seminar was the fourth of ten in our AI3SD Winter Seminar Series. This seminar was hosted online via a zoom webinar. The event was themed around ML for Scientific Discovery and consisted of two talks on this subject. Below are the two videos of the talks with speaker biographies, and the full playlist of this seminar can be found here.

Professor Jacqueline Cole holds the Royal Academy of Engineering Research Professorship in Materials Physics at the University of Cambridge, where she is Head of Molecular Engineering. She concurrently holds the BASF / Royal Academy of Engineering Research Chair in Data-driven Molecular Engineering of Functional Materials. This is partly funded by the ISIS neutron and Muon Source, STFC Rutherford Appleton Laboratory, Oxfordshire, UK, with whom she holds a joint appointment. At Cambridge, she carries a joint appointment between the Physics Department (Cavendish Laboratory) and the Department of Chemical Engineering and Biotechnology at Cambridge. She combines artificial intelligence with data science, computational methods and experimental research to afford a ‘design-to-device’ pipeline for data-driven materials discovery. Her research is highly interdisciplinary. Accordingly, she holds two PhDs: one in Physics from the University of Cambridge and one in Chemistry from the University of Durham.

Graduated from Exeter University with a BSc in Chemistry in 1996, qualified as a teacher with a PGCE from Durham University then taught at Varndean School for a couple of years in Brighton, before doing an MSc in 1999, then DPhil in Organometallic chemistry at Sussex University. Between 2004 and 2006 I worked with Prof. Mathey at UC Riverside, before coming back to teach at a school in Duisburg Germany. I returned to the UK and taught chemistry and maths to A level, at Farnborough Sixth Form, then the Isle of Wight College, Barton Peveril and Itchen College. In 2018, did a second MSc in Artificial Intelligence at Southampton University, then worked as a Teaching Fellow in Computer Science for a year, before starting in my present job as a Research Fellow in Machine Learning.