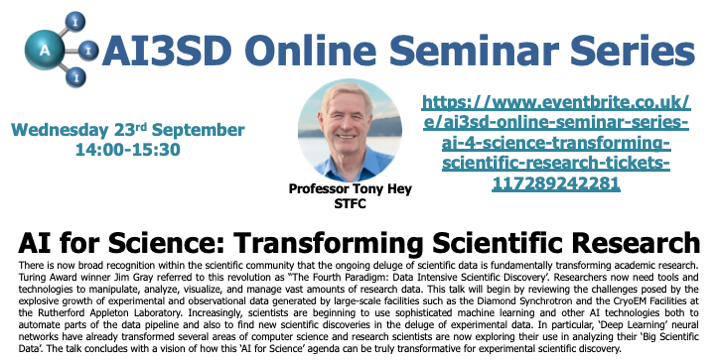 Abstract: There is now broad recognition within the scientific community that the ongoing deluge of scientific data is fundamentally transforming academic research. Turing Award winner Jim Gray referred to this revolution as “The Fourth Paradigm: Data Intensive Scientific Discovery’. Researchers now need tools and technologies to manipulate, analyze, visualize, and manage vast amounts of research data. This talk will begin by reviewing the challenges posed by the explosive growth of experimental and observational data generated by large-scale facilities such as the Diamond Synchrotron and the CryoEM Facilities at the Rutherford Appleton Laboratory. Increasingly, scientists are beginning to use sophisticated machine learning and other AI technologies both to automate parts of the data pipeline and also to find new scientific discoveries in the deluge of experimental data. In particular, ‘Deep Learning’ neural networks have already transformed several areas of computer science and research scientists are now exploring their use in analyzing their ‘Big Scientific Data’. The talk concludes with a vision of how this ‘AI for Science’ agenda can be truly transformative for experimental scientific discovery.

Biography: Tony is the Chief Data Scientist at the Science and Technology Facilities Council. Tony’s original background was in Physics, completing his undergraduate degree and subsequent post-docs at the University of Oxford in the UK and then CalTech and CERN in the USA. He worked at the University of Southampton in the Physics Department originally before transferring to the Electronics and Computer Science Department where he created a leading research group in parallel computing. He was the director of the UK’s e-Science initiative (2001-2005) and then became the Vice President in Microsoft Research afterwards.